“Whether the town and village of Morristown along the St. Lawrence River in St. Lawrence County were named for Gouverneur Morris, noted Revolutionary patriot, or for Morristown, N.J., may be a moot subject for debate. Be that as it may, this fine old cup-and-saucer type house, which stands on the corner where the old Ogdensburg and Rossie turnpikes meet, is one of the most ancient dwellings in Morristown village.

From its lofty site it looks placidly across the mile width of river to the city of Brockville, Ontario. It seems likely that is at least 135 years old and occupies land once owned by Gouverneur Morris, the two parcels of the lot having been sold by Morris September 1, 1815, to Arnold Smith, first tavern-keeper in the town of Morristown. According to the deed Smith had a house upon the site before Gouverneur Morris transferred the land to him. This must have been so, for the next day Smith conveyed the same property to John Hooker, a native of New Haven, Connecticut, for $3,475.

Smith had located in the town shortly after Col. David Ford had opened it up for settlement in 1808. History relates that Hooker moved in from Turin in the fall of 1815 and bought Arnold Smith’s hotel. That statement and the date in the deed of this property to him would imply that it early was a tavern.

Hooker kept the place until August 23, 1823, when he sold it and a garden plot in the rear to Alfred Hooker, and the following November 23 married Melinda, daughter of John Canfield, another early settler of the town, which had only been legally set up on March 27, 1821, with Canfield and Paschal Miller assessors and Hooker overseer of the poor. David Ford was the first supervisor. 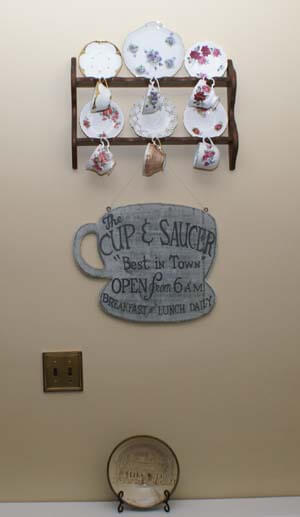 Hooker also was first collector of the port. Canfield built the first storehouse and in 1817 constructed the first wharf.

Griffin died January 16, 1868, and his executors, Emily Griffin and Henry Russell disposed of the place to John D. Soper on November 1, 1880. Soper died September 30, 1881, leaving the property to his daughter, Mrs. Mary E. Pierce. She died March 17, 1932, willing this house and land to her husband, Thomas W. Pierce, to whom she had been married in 1879 and who was long a prominent Morristown merchant and politician. He had been village treasurer, member of the school board and on February 29, 1892, was appointed postmaster by President Benjamin Harrison.

Mrs. Janet Murray acquired the property from Mr. Pierce on August 12, 1932, five months after he inherited it from his wife. Located on the main business street it commands instant attention of the tourist and, designated the “Colonial,” has for some time been conducted as a tourist home by Mrs. Murray. Its central front door is of beautiful Georgian and opens into a hall, which equally divides the house. The main rooms are large and the house has ample size.”

The Paschal Miller House is also known as having ties to the Underground Railroad. It is suspected to have a connection in the history of the Prohibition Era.

Information obtained from the St. Lawrence County Historical Association and Judith Liscum from an article written by David F. Lane.

We stand ready to assist you. If a death has occurred, please call us on the number below: